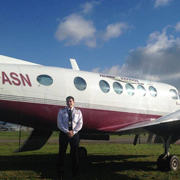 The PRP is Becoming Wings Over New England: Help Design the New Program

By Evan Reiter, July 12 in Announcements